Just a note of thanks to Jeff Moss for an unbelievable and invaluable Phenom 300 training and type-rating experience.  MossY, you are undoubtedly the best flight instructor out there and I would wholeheartedly recommend you to anyone looking for a substantive and quality flight training experience.  I followed up with a recurrent at CAE after our initial training and although the program was good, they didn't touch your experience and hands-on flying knowledge.   Can't wait to burn some jet fuel in my new plane!    And ... Check out my new paint job!

I just complete a type rating in Phenom 300 with Jeffrey Robert Moss (aka MossY). It was an incredible experience due to MossY ’s wonderful teaching style, passion and vast skills. My insurance company required I fly additional hours with a mentor pilot. This is where MossY kicked up my IFR game. He had me fly, difficult RNAV arrivals in VNAV, big airport approaches, mountain approaches, every kind of approach to minimums, misses and all types of holds. This training increased my situational awareness to a level I had no idea was possible. Also, note that I earned my Mustang rating with MOSSY. He has now impacted my skills as an aviator in many more ways. I will work with him again and would recommend him to anyone looking to fly like a pro. I have been flying for over 30 years in many different aircraft and have accumulated over 3000 hours in that span of time.  I have been an multi IFR pilot since the early 1990s and have mostly flown in the IFR system since that time.  Prior to moving up to the Phenom 300, I owned a TBM 850 on which I accumulated 1100 hours.

I completed my initial Phenom training in the simulator at CAE and was typed in August and began my training with Jeffrey Robert Moss (MossY) in October when I took delivery of SN 50500307.  I cannot speak too highly of MossY or recommend a better flight instructor and mentoring pilot for anyone transitioning to single pilot operations in a high performance jet like the Phenom 300. MossY runs a tight ship and demands the same from his students. He provides a well thought out curriculum (contained in a 45 page syllabus) for building the skills necessary to confidently take to the skies alone in an advanced and highly capable jet aircraft.

His in depth program covers everything from Preflight inspection to Shutdown in painstaking detail including more single engine situations, unusual attitudes and non-typical instrument approaches and procedures than I imagined existed. He employs the SOPs that are proven in airline cockpit environments and adapts them for single pilot operations employing practical acronyms, flows, call-outs and checklist discipline.

The General Aviation Awards Program (a partnership between the FAA & Industry) named MossY the 2010 National Flight Instructor of the Year and anyone who has flown with him or has seen his videos (www.flylikethepros.com) would agree that his depth of knowledge on Garmin Avionics (both G1000 and G3000 suites) is second to none. While owning the TBM 850 (flying over 1100 hours in 5 years), I maintained the discipline of doing recurrent training alternating between the Sim and the aircraft every six months so I came into this training as a capable pilot with strong stick and rudder and procedural skills developed over years of flying high performance aircraft.  MOSSY helped me to really "up my game" enabling me to acquire and develop the skills and disciplines necessary to operate in the most demanding environment there is for a general aviator - flying a single pilot jet.  Over the years I've trained with many great instructors but, for this transition, MOSSY was hands down the best.

Feeling Confident in the Left Seat

What a difference 3 weeks make! With 1250 hours total time, and only 50 of those hours being SIC jet, I was excited and anxious to pursue my very first type rating. I had been unable to find the time in my schedule to leave town for the 3 weeks needed for the sim training and was pleasantly surprised when a friend introduced me to Jeffrey Robert Moss "MossY" at an event an San Diego in January of 2014. MossY had mentored my friend in his Phenom 100 and he went on and on about the effectiveness of his instruction and his passion for all things flight. Within 10 minutes MossY and I had agreed to align our schedules and begin my training.
On the first day of training, back in my home state of Texas, I knew that I had made the right decision. MossY understood that I had to make time in my day to run my business, and he allowed for those breaks in our schedule. However, when the break was up he made it clear that my focus had to be on my training and nothing else. So with the cell phones turned off we worked through 3 weeks of long days training both in the classroom and in the airplane. In the end, I was confident and ready to take my checkride and was pleased when the CA told me that he'd never had a student answer every question correctly on a particular part of his oral. Three hours, and a few maneuvers and approaches later, I had my first rating.
Late last year I went to Flight Safety for my Legacy 500 rating and during one sim session, while adjusting my autopilot, I said "Rumor" while making the inputs and "Fact" while pointing at the scoreboard. My sim instructor asked me about why I'd said that and I told him that MossY had taught me that to remind me to verify on the scoreboard that the autopilot was doing what I intended it to do. He was impressed and now uses that in his instruction as well.  MossY not only knew the Phenom 300 like the back of his hand but he knew the ins and outs of the Garmin G3000 flight deck and furthermore, could teach it!  MossY also customized a single pilot jet type rating and mentoring for another friend of mine in his Phenom 300.  The training was outstanding!
I highly recommend MossY for anyone who is either looking to obtain a Phenom rating or who wants to take advantage of having a enthusiastic mentor to come along side them for a week or two to be sure that you're getting the most from your plane in the safest way possible.

Credit Where Credit's Due

Training for a Single-Pilot Type Rating

What can I say to you that you have not heard before.  I doubt there is anything, however, I will make an attempt.  You are one of a kind but you already know that.

On a serious note, I have never witnessed the outward passion you have to make sure you impart the ever important wisdom that is needed in safely operating a most complex machine.  I feel blessed to have been lucky enough to be at the right place at the right time.  I have experienced what makes you a special standout professional.  You time and again would take the time to explain what is important in the management of a very fast aircraft.

Words can only begin to resonate what the experience is to be tutored by you.  There is no messing around, this is serious business and you address it as such.  People have killed themselves by not knowing the right thing to do.  I am sure you have saved countless people their existence and they don't even realize it.  However, I can say I do.  There is no question you know your subject matter and being able to learn from you has been invaluable.

I want to thank you from the bottom of my heart for your passion, your desire to truly teach the student, in this case me.  There is no question off limits with you and you explain it so even the neophyte will understand.  One thing especially comes to my mind and that is how well you prepare.  You brought additional information to the process that was not found anywhere else and it has made me a better pilot.

You are the man. Mossy is a great teacher - my new CE-510S type rating

I just finished seven days (spread over two weeks) with Mossy. Not only did I achieve the single pilot type rating I sought, I now feel far more competent and confident flying. Even though I had over 100 hours with another highly-qualified mentor pilot, and I had taken the transition course for the Mustang at Flight Safety last July where I received my crew type rating, Mossy took my flying skills to a higher and more consistent level.

It was very real world too. We had mechanical and weather related issues which kept the plan changing.

Looking back on the experience, there are a few themes Mossy pushed hard. I believe they really helped me.

1) Callouts. These he learned from the top training pilots at the airlines. I now believe they are essential, because they keep me from fixating. Callouts are programmed in my mind, just like the abc's, and I don't have to think about what is next. I still miss some of them and have work to do, but I am 90 percent better than before.

2) Flows backed with a checklist. Mossy has great flows for the Mustang that are easy for me to remember and make sense. He gave me his well-thought out and thorough checklist as a follow up, because, as he says, "I always forget one thing."

3) Triggers. Mossy has lots of sayings and callouts that trigger actions. For example, "Gear down, slow down." These serve as mental checklists which I find to be particularly useful to me as a single pilot, especially because I don't get to fly every day.

4) Passionate teaching style. Mossy mixes continual and consistent correction with positive comments and encouragement. I have over 1300 hours, and lots of bad habits. For example, I used my index finger on the thumb wheel. Mossy told me this doesn't work in turbulence, and I spent at least a week in "retraining." We had to unlearn lots of stuff like that, and then put my flying back together quickly for the check ride. We got it done.

It was frustrating to realize so many habits were not best practice, but now that I've learned the new more professional ways, I feel like a better and safer pilot.

In summary, Mossy learned his teaching techniques from the best airline training captains. He developed relationships with them over the years and copied what they taught him. He then designed a program to teach them to the single pilot jet owner.

I love to fly. I want to do it better. Mossy's training was perfect for me. 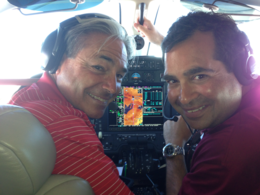 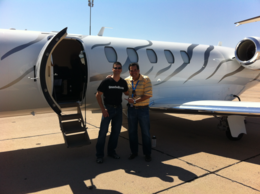 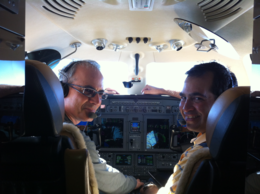 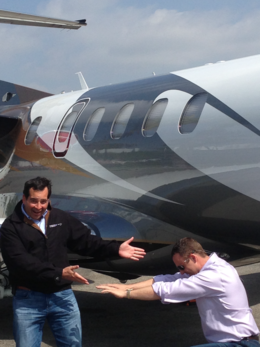